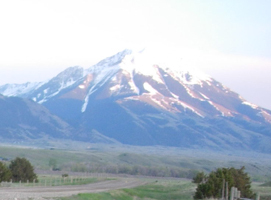 Park County, so named due to its proximity to Yellowstone National Park, was created by the territorial legislature February 23, 1887. Prior to the coming of the white man the only residents were Crow Indians who roamed the entire Yellowstone River basin. The first white people to enter the local area were the famous Lewis and Clark along with their party including Sacajawea. Jim Bridger (the famous scout and mountain man) wintered with the Crow Indians near Emigrant in 1844-45. In the three decades after Lewis and Clark, this area as well as much of the mountain west was actively trapped by hundreds of men, primarily for beaver. In the decades starting 1840 and 1850, the trapping activity largely ceased because of lack of beaver demand due to the changed styles and the country being trapped out. Gold was discovered in Emigrant Gulch in 1863. By the fall of 1864, several hundred men were working claims there. When winter came, 75 log huts were built at the mouth of the gulch and the town named Yellowstone City.

In 1864, John Bozeman opened up the new road bearing his name to shorten, by several hundred miles, the route between Fort Laramie and the gold localities of Western Montana. The road passed through the Livingston area and then out over Bozeman Pass. In the mid-1860s, there was much travel going east. The almost complete lack of roads in the territory led to the use of the rivers, including the Yellowstone, as routes. The Livingston area was an embarkation point for hundreds of people prepared to risk the hazards of the river and Indians in mackinaws (these were flat boats 30-50 feet long and 4-5 feet high at the sides, some with crude cabins on them). Much of the lumber came from the first saw mill in the area on Mill Creek. In 1865 one fleet of 42 mackinaws left the boat yard on September 27. A year later a fleet of 16 mackinaws left the Livingston area with 250 miners carrying $500,000 in gold. They made the 2700 mile trip to St. Joseph in 28 days. In 1864 Hunter's Hot Springs was discovered by Dr. Hunter and his party, passing through. Dr. Hunter returned six years later, built a house and took residence, in spite of Indian dangers. Later, the area was famous as a resort for many years. In 1866, 600 Longhorn cattle that had made the long drive from Texas were trailed into the Shields Valley by Nelson Story for eventual sale to the miners further west. Before this could be accomplished, over half of the cattle were lost to marauding Sioux.

In April 1867, John Bozeman was killed by Blackfoot Indians near Mission Creek. This incident, added to others, caused the then territorial governor to organize a militia to punish the Indians and protect the settlers. Six hundred men encamped at Fort Howie at the mouth of the Shields River.

In 1868, in accordance with the Crow Treaty of that year, an Indian agency was established on the Crow reservation on Mission Creek. It was considered the finest fort in the territory, fully stockaded, blockhouses on the corners, etc. The requirements of the Fort for supplies caused a ferry to be set up across the Yellowstone River four miles east of the present site of Livingston. A small settlement, known as "Benson's Landing," grew up here. For many years, it was the focal point of the area with some log houses, a hotel, several saloons, etc. It served as a stage stop, trading post and post office. For a very long time, the area of Yellowstone Park was almost completely unknown. The stories told over the years by Jim Bridger, traders and the Indians were received incredulously. The place was known as "Colter's Hell" from Colter's stories of his winter there in 1807-1808. In 1869, the first real exploring party entered the Park area, followed by the Washburn party of 1870 and Hayden party of 1871. This led to the creation by Congress of the country'?s first national park in 1872.

By 1880, the population for the county was only about 200. In 1881, the Northern Pacific Railroad, building a line westward, entered the state of Montana. Livingston was reached November 22, 1882 where a settlement of 500 people had sprung up, awaiting the railroad. In 1883, the National Park branch of the NP Railroad was completed and the east west sections of the railroad joined together near Garrison, this opened up the entire country. Following these events, the local area had a period of rapid growth. By 1890, the county had a population of 6,900. Steady growth since then has brought the county to where it is today.

This information was collected and compiled by Jim and Carol Romans.

Disclaimer
While attempts are made to ensure the accuracy and suitability of information under our control & correcting errors brought to our attention, no representation or guarantee can be made as to the correctness or suitability of that information or any linked information presented, referenced, or implied. No endorsement is intended or made of any hypertext link, product, service, or information either by its inclusion or exclusion from this page or site. All vital information should be independently verified.
Tweets
Tweets by @parkcountyMT
Weather
Resources
Park County © 2020 Privacy Policy