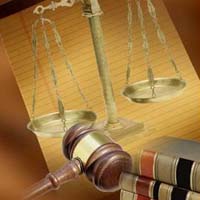 Court appearances: are on Tuesday and Thursday mornings at 9:00 a.m. SHARP. Check In starts at 8:30 AM. Appearances are for
misdemeanors: Sheriff Department citations, Highway Patrol citations, Fish, Wildlife & Parks citations, GVW citations, and Criminal Complaints
Felonies: Initial appearances on all of the above. Appearances for defendants in the Detention Center may be held at times other than 9AM on days that are not regular appearance days.
Civil Complaints UP TO $12,000 and Small Claims up to $7000 are filed in Justice Court.

Law and Motion will start at 8:30 AM on certain Mondays.

Difference between Civil and Criminal Cases

Criminal and civil cases may be heard by a judge or a jury. If a trial is by judge, there is no jury and the judge makes the decision based on the testimony and evidence presented.

Civil: Civil cases involve disputes (usually about money) which the parties haven't been able to solve between themselves, and have turned to the court system to resolve. The person bringing the complaint in a civil suit is called the plaintiff. The one defending him or herself against the complaint is the defendant. Defendant must reside in Montana. In a civil case, the jury is asked to determine which side is favored by the preponderance of evidence. Civil jury decisions can be made by a two-thirds majority of jurors. A unanimous verdict is not required, as it is in a criminal trial. Justice Court has a monetary limitation of $12,000. If the amount in dispute is more than $12,000 the case must be filed in District Court.

Records requests are $25 per name.
Disclaimer
While attempts are made to ensure the accuracy and suitability of information under our control & correcting errors brought to our attention, no representation or guarantee can be made as to the correctness or suitability of that information or any linked information presented, referenced, or implied. No endorsement is intended or made of any hypertext link, product, service, or information either by its inclusion or exclusion from this page or site. All vital information should be independently verified.
Tweets
Tweets by @parkcountyMT
Weather
Resources
Park County © 2020 Privacy Policy